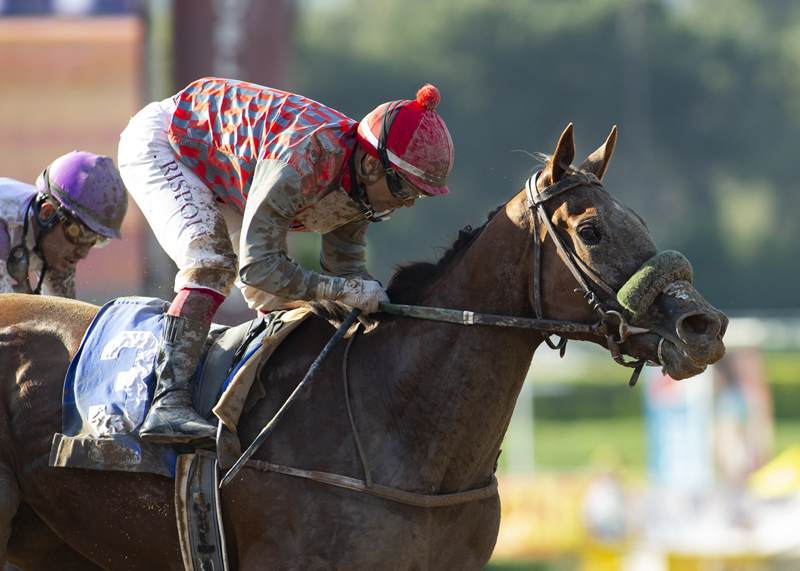 The nine lassies entered for the dash will compete over seven furlongs in the first of eight Cal-bred races at Del Mar that are part of the $4.35 million 2021 Golden State Series for registered California-bred or sired horses. There are 36 races in total in the series over the course of the year at five different tracks in the state.

The Fleet Treat, which will be having its 36th running, looks like a competitive affair with two of the fillies likely to draw the most attention. They would be Lovingier, Beckerle or Navarro’s Fi Fi Pharoah and Harris Farm’s Closing Remarks.

The former comes off a handy score in the Melair Stakes for Cal-breds at Santa Anita on June 19 where she closed from far back to tally by a half length going a mile and one-sixteenth. The latter has been facing open stakes company in her last three and wound up second in each of them. Those races all were on the grass and, in fact, the Fleet Treat will be Closing Remark’s eighth race, but her first on dirt.

Here’s the full field for the Fleet Treat from the rail out with riders:

Fi Fi Pharoah, as her name suggests, is a daughter of Triple Crown winner American Pharoah. The chestnut filly has won two of five starts and sports a bankroll of $178,560. Del Mar’s morning line maker, Jon White, has tabbed the chestnut miss a slight 5/2 favorite for the dash.

Closing Remarks has competed seven times and shows two wins and three second for her efforts, along with winnings of $209,500. The daughter of Vronsky, bred by her owner and training out of the barn of Carla Gaines, has been made a close 3-1 second choice in the Fleet Treat.

Eddie’s New Dream, a gray daughter of the late Square Eddie, has been stakes-placed twice. She chased home Fi Fi Pharoah in the Melair at Santa Anita last out.

Respectfully shows three wins and a pair of seconds from eight starts. The Smiling Tiger filly has banked $109,718 so far, including a pair of allowance wins at Santa Anita this spring.

First post on Friday will be at 4 p.m. Del Mar will return to its usual 2 p.m. post for its Saturday and Sunday cards.