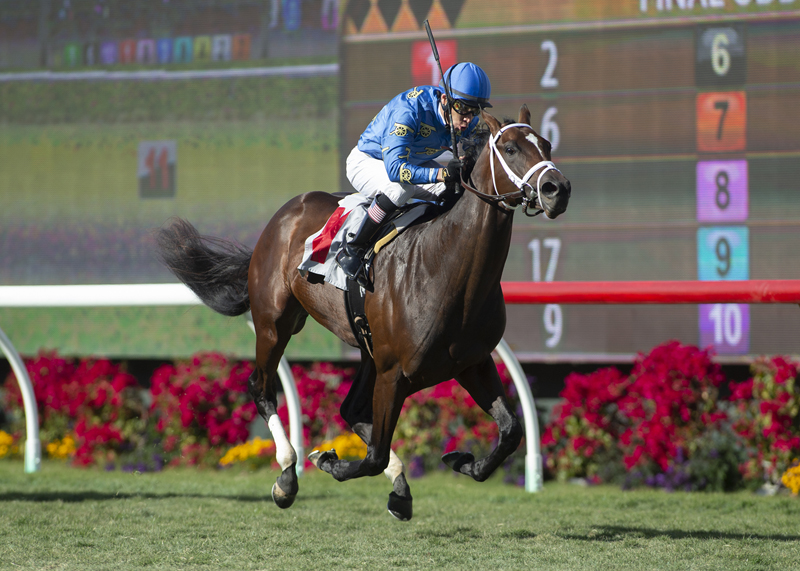 Smooth Like Strait, a 15-1 longshot piloted by Geovanni Franco, sprinted to the lead out of the gate and never looked back in scoring a wire-to-wire victory Sunday in the Grade III $100,000 Cecil B. DeMille Stakes for two-year-olds on closing day of Del Mar’s 2019 fall Bing Crosby season.

Well-rated by Franco, Smooth Like Strait shook off his challengers in the upper stretch and continued on strongly to score by two and one-half lengths in 1:36.02 for the mile over the infield grass course.

Goliad was runner-up, three-quarters of a length in front of 30-1 outsider Last Opportunity, who nosed out 2-1 favored Hit the Road for third in the field of 13 juvenile runners.

Smooth Like Strait, a son of Midnight Lute, is owned by Cannon Thoroughbreds, nom de course of Robert Cannon of Las Vegas, and trained by Michael McCarthy. The victory was the colt’s second in four starts and first money of $60,000 increased his earnings to $96,351.

GEOVANNI FRANCO (Smooth Like Strait, winner) – “He ran well. He showed he could handle the distance nicely. Mike (McCarthy, trainer) has done a nice job with him, moving him up and along nicely. He handled this course fine today. I think the rain was good for it. For the dirt track, too. They both seem to be very good right now. The winner is a nice colt. He may be ready now to step up and win some other really good races.”

MANUEL FRANCO (Last Opportunity, third) – “My trip was good. But I was coming out of the 12 (post) and I had to give up a lot of ground.”

MIKE McCARTHY (Smooth Like Strait, winner) – “He had a good work at Del Mar this summer before he ran on Pacific Classic day on the dirt and just spun his wheels. It was always in the back of my mind to try him on the grass because he acts like a grass horse. Obviously, today he was able to get himself on an easy lead, put them to sleep and the rest is history.”

The stakes win was the first of the meet and the first in the Cecil B. DeMille for rider Franco. He now has three stakes wins at Del Mar.

The stakes win was the first of the meet and the first in the Cecil B. DeMille for trainer McCarthy. He now has two stakes wins at Del Mar.

The winning owner is Cannon Thoroughbreds, which is the nom du course for Robert Cannon of Las Vegas, NV.