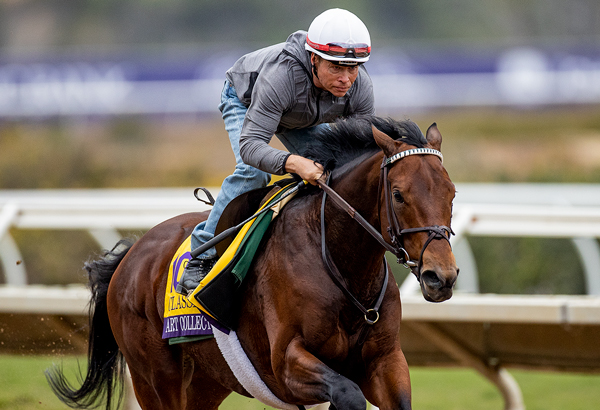 Bruce Lunsford’s Art Collector, who figures to be one of the leading candidates for Saturday’s $6 million Longines Breeders’ Cup Classic (G1), worked a half-mile in :48.40 Sunday morning to highlight a work tab that featured 20 pre-entrants to the World Championships slated for Friday and Saturday at Del Mar.

Art Collector was one of three horses to work for Hall of Fame trainer Bill Mott. Neil Poznansky was aboard the trio that included Casa Creed (Mile) going 4f in :47.60 and War Like Goddess (Filly & Mare Turf) going a half-mile in :48.20.

“They were all useful works, nothing blazing fast,” said Mott, who has won 10 Breeders’ Cup races. “I never have a problem working good grass horses on dirt and this track looks safe and very forgiving.”

Trainer Rudy Rodriguez was aboard Bella Sofia as she covered a half-mile in :48.40 in preparation for the Filly & Mare Sprint.

“She’s a happy girl and she loves to just go about her business,” Rodriguez said of Bella Sofia who has won four of five career starts and features daylight victories in the Test (G1) and Gallant Bloom (G2) in her past two outings. “She handled the track well and was very comfortable on it.”

In all, 14 pre-entrants worked on the fast main track and six more were on the firm Jimmy Durante Turf Course.

Idol worked 5f in company in 1:02.40 but after the work trainer Richard Baltas notified Breeders’ Cup officials that he did not feel Idol was 100 percent and withdrew him from the Classic.

Two other horses were withdrawn from Breeders’ Cup consideration by their connections Sunday morning: Flagstaff from the Qatar Racing Sprint and Reina de Mollendo (ARG) from the Maker’s Mark Filly & Mare Turf.

Highlighting the six pack of grass workers were two California standouts in Mo Forza and Going to Vegas.